2. Key Messages for People with Diabetes

When you are sick, your blood glucose levels may fluctuate and be unpredictable:

Diabetic ketoacidosis (DKA) and hyperosmolar hyperglycemic state (HHS) are diabetes emergencies with overlapping features. With insulin deficiency, hyperglycemia causes urinary losses of water and electrolytes (sodium, potassium, chloride) and the resultant extracellular fluid volume (ECFV) depletion. Potassium is shifted out of cells, and ketoacidosis occurs as a result of elevated glucagon levels and insulin deficiency (in the case of type 1 diabetes). There may also be high catecholamine levels suppressing insulin release (in the case of type 2 diabetes). In DKA, ketoacidosis is prominent while, in HHS, the main features are ECFV depletion and hyperosmolarity. HHS is the preferred term to describe this condition as opposed to hyperosmolar nonketotic coma (HONKC) since less than one-third of people with HHS actually present with a coma (1).

Risk factors for DKA include new diagnosis of diabetes mellitus, insulin omission, infection, myocardial infarction (MI), abdominal crisis, trauma and, possibly, continuous subcutaneous insulin infusion (CSII) therapy, thyrotoxicosis, cocaine, atypical antipsychotics and, possibly, interferon. HHS is much less common than DKA (2,3). In addition to the precipitating factors noted above for DKA, HHS also has been reported following cardiac surgery and with the use of certain drugs, including diuretics, glucocorticoids, lithium and atypical antipsychotics. Infections are present in 40% to 60% of people with HHS (4). In up to 20% of cases of HHS, individuals had no prior history of diabetes (4).

The clinical presentation of DKA includes symptoms and signs of hyperglycemia, acidosis and the precipitating illness (Table 1). In HHS, there is often more profound ECFV contraction and decreased level of consciousness (proportional to the elevation in plasma osmolality). In addition, in HHS, there can be a variety of neurological presentations, including seizures and a stroke-like state that can resolve once osmolality returns to normal (3,5,6). In HHS, there also may be evidence of a precipitating condition similar to DKA.

In individuals with type 2 diabetes, the incidence of DKA is estimated to be in the range of 0.32 to 2.0 per 1,000 patient-years (7) while, in people with type 1 diabetes, the incidence is higher at 4.6 to 8.0 per 1000 patient-years (8). There is a group of individuals with diabetes that present with DKA but do not have the typical features of type 1 diabetes. There are various terms given to characterize this condition, such as flatbush diabetes, type 1.5 diabetes, atypical diabetes or type 1B diabetes, but it may be most useful to label this state as ketosis-prone diabetes (KPD). There are several classification systems used to describe KPD that take into account pathophysiology and prognosis. Individuals with KPD have very little beta cell function, may or may not have beta cell antibodies, and some may require temporary or lifelong insulin therapy (9).

SGLT2 inhibitors may lower the threshold for developing DKA through a variety of different mechanisms (11–13). The presentation of the DKA is similar to those who develop DKA without SGLT2 inhibitor exposure, except that the blood glucose (BG) levels on presentation may not be as elevated as expected. In randomized controlled trials, the incidence of DKA associated with SGLT2 inhibitors is low (≤0.1% of treated people) (14,15). In most cases, there is usually a known precipitant as a contributing factor, such as insulin dose reduction or omission, bariatric surgery or other surgery, alcohol, exercise, or low carbohydrate or reduced food intake (16–20).

DKA or HHS should be suspected whenever people have significant hyperglycemia, especially if they are ill or highly symptomatic (see above). As outlined in Figure 1, to make the diagnosis and determine the severity of DKA or HHS, the following should be assessed: plasma levels of electrolytes (and anion gap), plasma glucose (PG), creatinine, osmolality and beta-hydroxybutyric acid (beta-OHB) (if available), blood gases, serum and urine ketones, fluid balance, level of consciousness, precipitating factors and complications (1). Arterial blood gases may be required for more ill individuals, when knowing the adequacy of respiratory compensation and the A-a gradient is necessary. Otherwise, venous blood gases are usually adequate—the pH is typically 0.015 to 0.03 lower than arterial pH (21-23). Point-of-care capillary blood beta-OHB measurement in emergency is sensitive and specific for DKA and, as a screening tool, may allow more rapid identification of hyperglycemic persons at risk for DKA (24–29). This test is less accurate with hemoconcentration and/or when the beta-OHB level is >3 mmol/L (30).

There are no definitive criteria for the diagnosis of DKA. Typically, the arterial pH is ≤7.3, serum bicarbonate is ≤15 mmol/L and the anion gap is >12 mmol/L with positive serum and/or urine ketones (1,31–33). PG is usually ≥14.0 mmol/L but can be lower, especially with the use of SGLT2 inhibitors (34). DKA is more challenging to diagnose in the presence of the following conditions: 1) mixed acid-base disorders (e.g. associated vomiting, which will raise the bicarbonate level); 2) if there has been a shift in the redox potential, favouring the presence of beta-OHB (rendering serum ketone testing negative); or 3) if the loss of keto anions with sodium or potassium in osmotic diuresis has occurred, leading to a return of the plasma anion gap toward normal. It is, therefore, important to measure ketones in both the serum and urine. If there is an elevated anion gap and serum ketones are negative, beta-OHB levels should be measured. Negative urine ketones should not be used to rule out DKA (35).

Pregnant women in DKA typically present with lower PG levels than nonpregnant women (36), and there are case reports of euglycemic DKA in pregnancy (37,38).

Objectives of management include restoration of normal ECFV and tissue perfusion; resolution of ketoacidosis; correction of electrolyte imbalances and hyperglycemia; and the diagnosis and treatment of coexistent illness. The issues that must be addressed in the individual presenting with DKA or HHS are outlined in Table 2. A summary of fluid therapy is outlined in Table 3, and a management algorithm and formulas for calculating key measurements are provided in Figure 1.

People with DKA and HHS are best managed in an intensive care unit or step-down setting (1,31,32) with specialist care (39,40). Protocols and insulin management software systems (41)may be beneficial (42,43), but there can be challenges with achieving adherence (44,45). Volume status (including fluid intake and output), vital signs, neurological status, plasma concentrations of electrolytes, anion gap, osmolality and glucose need to be monitored closely, initially as often as every 2 hours (1,31,32). Capillary blood glucose (CBG) measurements are unreliable in the setting of severe acidosis (46). Precipitating factors must be diagnosed and treated (1,31,32).

The sodium deficit is typically 7 to 10 mmol/kg in DKA (47) and 5 to 13 mmol/kg in HHS, which, along with water losses (100 mL/kg and 100 to 200 mL/kg, respectively), results in decreased ECFV, usually with decreased intracellular fluid volume (47). Restoring ECFV improves tissue perfusion and reduces plasma glucose levels both by dilution and by increasing urinary glucose losses. ECFV re-expansion, using a rapid rate of initial fluid administration, was associated with an increased risk of cerebral edema in 1 study (48) but not in another (49). In adults, one should initially administer intravenous normal saline 1 to 2 L/h to correct shock, otherwise 500 mL/h for 4 hours, then 250 mL/h of intravenous fluids (50,51). 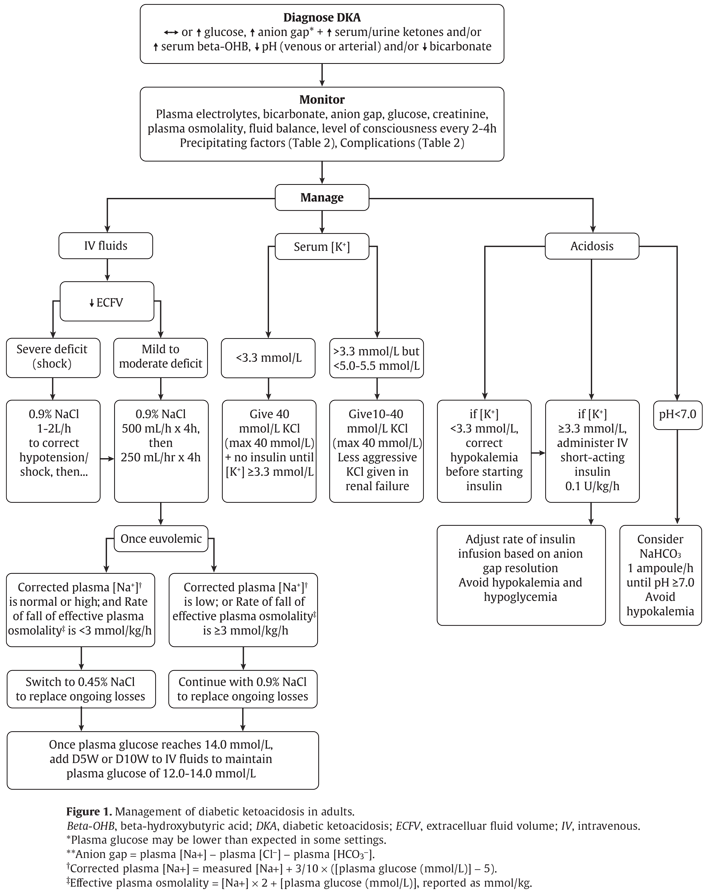 The typical potassium deficit range is 2 to 5 mmol/kg in DKA and 4 to 6 mmol/kg in HHS (48). There have been no randomized trials that have studied strategies for potassium replacement. Typical recommendations suggest that potassium supplementation should be started for plasma potassium <5.0 to 5.5 mmol/L once diuresis has been established, usually with the second litre of saline. If the individual at presentation is normo- or hypokalemic, potassium should be given immediately, at concentrations in the intravenous fluid between 10 to 40 mmol/L, at a maximum rate of 40 mmol/h.

In the case of frank hypokalemia (serum potassium <3.3 mmol/L), insulin should be withheld until potassium replacement at 40 mmol/h has restored plasma potassium to ≥3.3 mmol/L (1,31). It is reasonable to treat the potassium deficit of HHS in the same way.

Metabolic acidosis is a prominent component of DKA. People with HHS have minimal or no acidosis. Insulin is used to stop ketoacid production; intravenous fluid alone has no impact on parameters of ketoacidosis (52). Short-acting insulin (0.1 units/kg/h) is recommended (53–55). There is no conclusive evidence supporting the use of an initial insulin bolus in adults and it is not recommended in children. Although the use of an initial bolus of intravenous insulin is recommended in some reviews (1), there has been only 1 randomized controlled trial in adults examining the effectiveness of this step (56). In this study, there were 3 arms: a bolus arm (0.07 units/kg, then 0.07 units/kg/h), a low-dose infusion group (no bolus, 0.07 units/kg/h) and a double-dose infusion group (no bolus, 0.14 units/kg/h). Outcomes were identical in the 3 groups, except 5 of 12 participants needed extra insulin in the no-bolus/low-dose infusion group, and the double-dose group had the lowest potassium (nadir of 3.7 mmol/L on average). Unfortunately, this study did not examine the standard dose of insulin in DKA (0.1 units/kg/h). In children, using an initial bolus of intravenous insulin does not result in faster resolution of ketoacidosis (57,58) and increases the risk of cerebral edema (see Type 1 Diabetes in Children and Adolescents chapter, p. S234).

A systematic review based on low- to very-low-quality evidence, showed that subcutaneous hourly analogues provide neither advantages nor disadvantages compared to intravenous regular insulin when treating mild to moderate DKA (59). The dose of insulin should subsequently be adjusted based on ongoing acidosis (60), using the plasma anion gap or beta-OHB measurements.

Use of intravenous sodium bicarbonate to treat acidosis did not affect outcome in randomized controlled trials (61–63). Sodium bicarbonate therapy may be considered in adult individuals in shock or with arterial pH ≤7.0. For example, one can administer 1 ampoule (50 mmol) sodium bicarbonate added to 200 mL D5W (or sterile water, if available) over 1 hour, repeated every 1 to 2 hours, until pH is ≥7.0 (1,31). Potential risks associated with the use of sodium bicarbonate include hypokalemia (64) and delayed occurrence of metabolic alkalosis.

Hyperosmolality is due to hyperglycemia and a water deficit. However, serum sodium concentration may be reduced due to shift of water out of cells. The concentration of sodium needs to be corrected for the level of glycemia to determine if there is also a water deficit (Figure 1). In people with DKA, plasma osmolality is usually ≤320 mmol/kg. In HHS, plasma osmolality is typically >320 mmol/kg. Because of the risk of cerebral edema with rapid reductions in osmolality (65), it has been recommended that the plasma osmolality be lowered no faster than 3 mmol/kg/h (1,31). This can be achieved by monitoring plasma osmolality, by adding glucose to the infusions when PG reaches 14.0 mmol/L to maintain it at that level and by selecting the correct concentration of intravenous saline. Typically, after volume re-expansion, intravenous fluid may be switched to half-normal saline because urinary losses of electrolytes in the setting of osmotic diuresis are usually hypotonic. The potassium in the infusion will also add to the osmolality. If osmolality falls too rapidly despite the administration of glucose, consideration should be given to increasing the sodium concentration of the infusing solution (1,31). Water imbalances can also be monitored using the corrected plasma sodium. Central pontine myelinolysis has been reported in association with overly rapid correction of hyponatremia in HHS (66).

PG levels will fall due to multiple mechanisms, including ECFV re-expansion (67), glucose losses via osmotic diuresis (52), insulin-mediated reduced glucose production and increased cellular uptake of glucose. Once PG reaches 14.0 mmol/L, intravenous glucose should be started to prevent hypoglycemia, targeting a plasma glucose of 12.0 to 14.0 mmol/L. Similar doses of intravenous insulin can be used to treat HHS, although these individuals are not acidemic, and the fall in PG concentration is predominantly due to re-expansion of ECFV and osmotic diuresis (67). Insulin has been withheld successfully in HHS (68), but generally its use is recommended to reduce PG levels (1,31).

In Ontario, in-hospital mortality in people hospitalized for acute hyperglycemia ranged from <1% at ages 20 to 49 years to 16% in those over 75 years (73). Reported mortality in DKA ranges from 0.65% to 3.3% (3,39,74–76). In HHS, recent studies found mortality rates to be 12% to 17%, but included individuals with mixed DKA and hyperosmolality (2,5,77). About 50% of deaths occur in the first 48 to 72 hours. Mortality is usually due to the precipitating cause, electrolyte imbalances (especially hypo- and hyperkalemia) and cerebral edema. 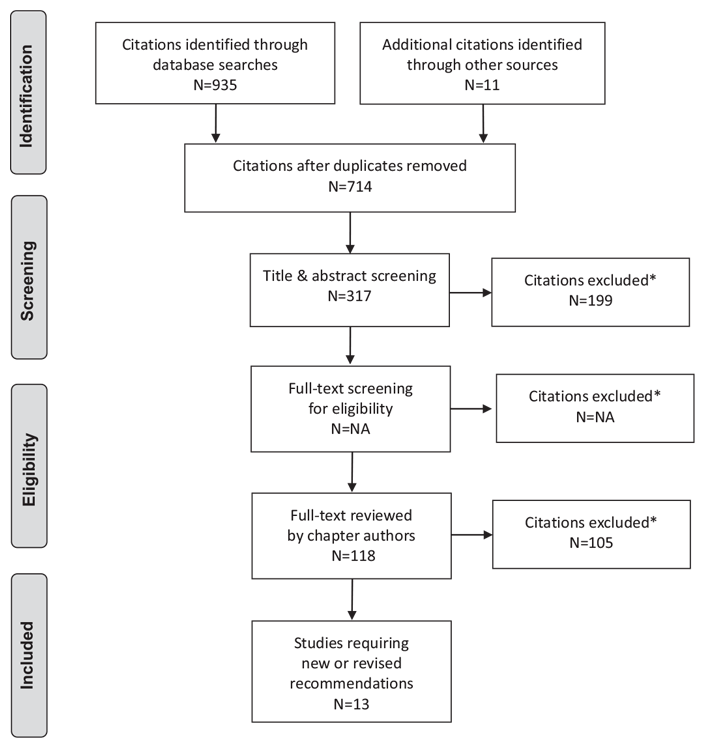 Dr. Gilbert reports personal fees from Amgen, AstraZeneca, Boehringer Ingelheim, Eli Lilly, Janssen, Merck, Novo Nordisk, and Sanofi, outside the submitted work. Dr. Goguen does not have anything to disclose.